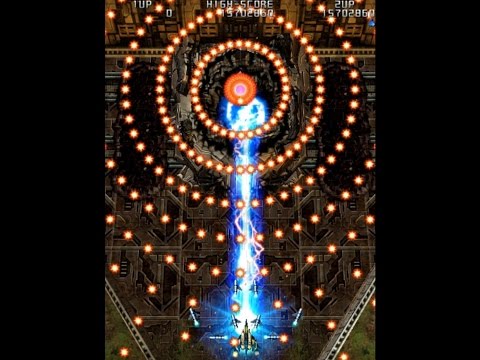 Raiden III is a game that can be described as ‘the awkward transition between old Raiden and new Raiden’. You have a tiny hitbox and the bombs are more like actual smartbombs now. Enemies also shoot directly at you from all angles now, instead of just a select few. This is quite fundamentally different to what Raiden was about. They didn’t quite figure out yet how to bring Raiden into a more modern shmup format until Raiden IV. Raiden III is probably the weakest entry in the series as a result. The stage- and boss design is pretty lackluster. The music is also pretty weak apart from the first and last stage and maybe the boss music. The game is also fairly easy for a Raiden game and doesn’t even loop. Lastly you go to space in stage 4 which is outrageous.

Player 2 has an advantage over player 1 in that his movement speed is faster.

The purple missiles are by far the best in this game. They do ultra-mega damage.

For scoring in this game they introduced speedkills. If you kill an enemy immediately you get x 2.0, this number decreases the longer the enemy is on screen.