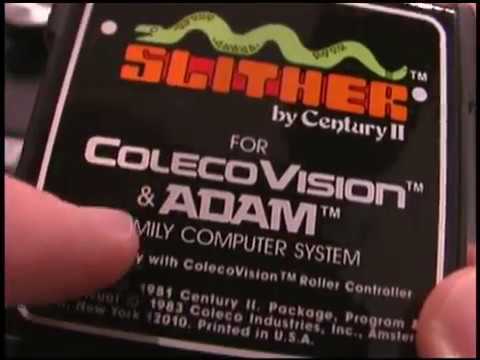 How To Make A Video Game Review Show That Doesn’t Suck!

Back CGR on Patreon at

Classic Game Room HD reviews SLITHER for Colecovision. This game has a copyright of 1983 and plays a lot like Centipede or Millipede. It requires the Colecovision Roller Controller trackball and plays like a real arcade stand up machine. Graphics are above average for the early 80’s, gameplay is awesome and Slither is a retro gamer classic for the ages. This old school game is from Century II. You play as a laser cannon or something resembling a gun turret. Your only mission is to survive as you eliminate wave after wave of enemy snakes, dinosaurs and pterodactyls. Watch out for bushes and rocks, shoot enemies above and below you. Collect bonus points and select your difficulty level. As far as Centipede clones go this may be the best. Classic Game Room reviews Slither for the CGRHD program and gives it two thumbs up. Always check back for daily Classic Game Room reviews of brand new games and old school classics. Only CGR does PS3, Xbox 360, Wii, Sega Genesis, NES, Atari, Magnavox and Colecovision reviews. Who else has a track ball out there anymore!!?? Will Slither ever make it to XBLA Xbox Live Arcade or Wii Virtual Console??